Monday’s edition of A Bola has a big article explaining just how brilliant Matheus Nunes is at the moment.

The 23-year-old midfielder was the subject of a tug-of-war between Portugal and Brazil this year. Born in Rio de Janeiro, he moved to Lisbon at the age of 12 and qualified to represent either country.

Brazil manager Tite called Nunes up for the national squad in August, yet he decided against accepting and made his Portugal debut in October.

During the Lisbon derby on Friday evening, Nunes was the star of the show, as Sporting beat Benfica 3-1. He scored a goal and added an assist, and will have impressed the multiple scouts watching… including someone from Leicester City.

As we covered at the weekend, Leicester had an official at the match and it’s certain Nunes will have caught the club’s attention. That won’t be for the first time, with today’s A Bola reporting the player had a training spell with the Foxes earlier in his career.

He also trained with Lille, SC Braga and Benfica. 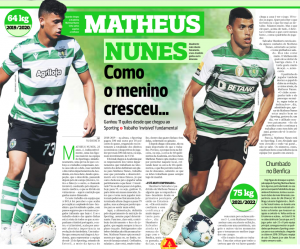 A little digging turns up old Portuguese claims saying Nunes spent a week with Leicester when he was just breaking through as a professional at Ericeirense, a small Lisbon club.

Given the trip of the Leicester scout, Nunes’ performance, and the old visit, the pieces of Foxes transfer interest are starting to fit together.