The Championship club are looking to add during the winter market, but with Bogusz being 17 years of age, he’d be more for the future than the current battle to get promotion.

A midfielder, Bogusz has a contract with Ruchu Chorzów which lasts until June. It’s thought a January move would see the Polish club pick up around €200k, but they’d rather not let him go at all.

Brighton are also interested, as are French club Stade Reims, and in the past year Napoli have invited the player over for training, although his club refused the request. 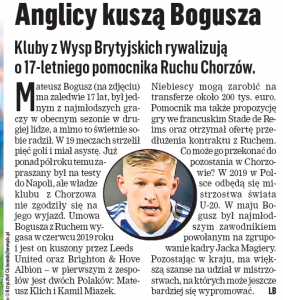 Przeglad Sportowy point out that Bogusz would be joining Mateusz Klich and Kamil Miazek at Leeds United, the third Pole at Elland Road.

Rucho’s hopes of an extension rest on the 2019 U20 Championship being held in Poland, with Przeglad Sportowy saying he’ll have a better chance of appearing if he stays.

Now the decision is down to Bogusza.