The Mario Gotze to Tottenham Hotspur story continues in German newspaper Bild. This time they’ve added some flesh to the bare bones of their original claims.

Whereas on Saturday the report was hard to find in Bild’s newspaper, on Sunday it’s different. Rather than a tiny snippet, the Gotze to Tottenham claims gets almost a full page. 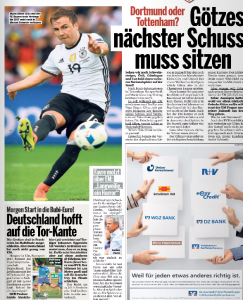 Gotze to Tottenham almost takes up a full page of the newspaper. The flesh added is that Tottenham have met Gotze’s father twice during Euro 2016.

That there have been two meetings rather than one seems quite positive, because the Gotze family clearly haven’t dismissed the idea outright.

The Bayern Munich player had previously split with his agent. At the time SportBild explained that Volker Struth was frustrated with Gotze turning down moves.

The agent believed Gotze was stalling his career and didn’t want to stand around and watch. Gotze is said to have been waiting for a big transfer chance at Real Madrid or Barcelona.

A relatively poor Euro 2016 has brought reality home and Gotze needs to reassess the level of club realistically interested in signing him this summer.

Tottenham have met Jurgen Gotze twice, and the player himself has told teammates that a decision is due soon. As pre-season training appears on the horizon, it’s crucial the player sorts his future out rather than continuing an ongoing status of uncertainty.

Bild say the biggest clubs in Europe are no longer interested in Gotze, and in truth they haven’t been for a while. Borussia Dortmund are still interested, but moved on to other alternatives after being snubbed whilst Gotze had La Liga dreams.

Gotze to Tottenham is a great opportunity for the player, if the interest is as serious as Bild claim, but someone from the Spurs forward line would surely see their nose put out of joint.