Marcelo Bielsa’s reign at Lille was an absolute mess.

He arrived at the French club with some fanfare and at first things were intriguing. The now Leeds United manager installed sleeping cabins (wooden camping huts) at the club’s training ground so players could sleep between double fitness sessions.

Lille feel they backed Bielsa, but he felt he wasn’t getting enough support and that not everybody was buying into his plans.

Things ended on a very sour note for both manager and club and there was talk of legal action going both ways, which thankfully seems to have been resolved.

Lille president Gerard Lopez has been speaking to Le Figaro and was asked about the situation.

Lopez clearly didn’t want to inflame things, quite the opposite, but he made Bielsa’s transfer approach clear: “I took the decision to have him come to Lille and especially to have given him all the freedom he could have had. 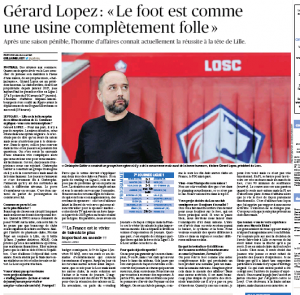 “He is doing a good job in Leeds. Here, he had chosen very young players and refused to take experienced players. I would not say he left a particular imprint here, but there is no negative legacy. What was less positive was corrected with the arrival of experienced players.”

Bielsa wants young players because he feels they’ll more readily buy into his philosophy, which is also part of the Mauricio Pochettino line of thinking, with the Tottenham manager having previously worked under his compatriot.