Sporting is a club in crisis. Leeds United fans know a good crisis, but Sporting’s recent troubles can probably compete.

Firstly there’s club president Bruno de Carvalho, who is a bit of a character (other words are available). He’s been through courts cases, usually with negative outcomes, ranted at his star players repeatedly via social media, suspended managers and players only to reappoint them days later, and cancelled transfers at the last minute.

Then last month things got rather more serious when a group of hooligans, quite possibly encouraged by Bruno’s ways, raided the club’s training ground. The gate was open, they burst in wearing scarfs wrapped around their heads and holding makeshift weapons and attacked players and manager Jorge Jesus.

Unsurprisingly that’s led several to want to leave, with Rui Patricio being one of those to take steps to rescind his contract. Jesus has already left the building, and now Sporting need a new manager.

In the ‘past few hours’, Marcelo Bielsa has appeared as an option, report Record, despite the Portuguese newspaper stating he’s in talks with Leeds United. 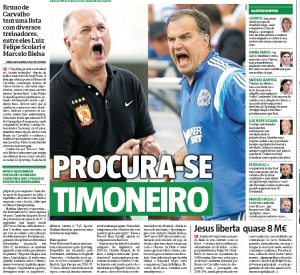 For now there’s nothing serious, and Luiz Felipe Scolari is the headline candidate, but Bielsa is included in the running.

Given the way the Argentine is, and that Bruno still hasn’t been forced out, it would be like two planets colliding. A hugely entertaining partnership more likely to end in civil war than all out peace.

Leeds United, however, may get in there first.