The Dutchman arrived at Goodison Park in the summer following a successful period managing PSV’s incoming and outgoing transfers. With the Eredivisie club currently storming through their domestic season, the Brands impact is clearly still important even though he’s left.

It’ll take some time for Brands to have a similar fingerprint on the Toffees, but several transfers in the summer looked like they were managed by the new man, and he’s clearly already got ideas for the future.

Many Everton fans want Andre Gomes to stay at the club when his loan from Barcelona expires, and the director of football feels the same way… as long as the midfielder wants to stay. 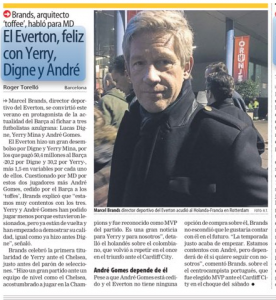 Mundo Deportivo asked about the situation, and got the following quote: “The season just started. We are happy with Andre, but will depend on him if he wants to continue with us.”

Asked about the Yerry Mina transfer and how that’s working out, Brands said: “He played a great game against a top level team like Chelsea, used to playing in the Champions League and he was recognised as the MVP of the match. It’s great news for Yerry and for us.”