Manchester United’s goalkeeper is more respected in England than he is in his own country and it was like that way before his average World Cup.

When much of the world couldn’t quite understand how Iker Casillas was keeping De Gea out of goal for the national team, it took a lot longer for the Spanish media to agree… and even then they weren’t entirely sure.

There’s every possibility this is all a throwback to then.

Anyway, after AS had already published an article saying De Gea insisted to hang on to the No.1 jersey, making Chelsea’s Kepa take No.13, in an especially odd article, Marca have joined in.

The Spanish newspaper have the pair on their Friday front page, with text stating ‘The debate for number one’. There’s nothing wrong with a debate, but it’s the way Marca go about things which adds to the oddness.

Marca believe De Gea had the ‘best season of his life’, yet can’t get over the mistake against Portugal.

Kepa has worked an advantage this season so far, explains the Spanish newspaper, and that’s because the ‘dynamic of Chelsea’ is much better than a ‘Manchester United full of doubts’, with De Gea pinpointed for failing to be the club’s ‘saviour’.

Marca then state the stopper’s problems with the national team could be ‘a matter of self confidence’… and yet they still don’t see it.

After a poor World Cup, with dramas off the pitch and not much to shout about on it, the Spanish media are once again homing in on David De Gea. The other players, judging by the Spanish slant this week, have largely been given a free pass. 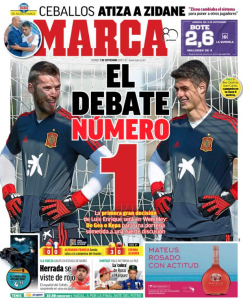 But then it’s more palatable to concentrate on a goalkeeping issue, and maybe even create one, than accept the team isn’t anywhere near what it once was.

If De Gea gets the nod and puts in anything less than a 10/10 performance then this will all continue. Even if the Manchester United goalkeeper pulls off a series of saves which could create a YouTube channel on their own, it genuinely feels like the Spanish media will be waiting for him to slip up.