Sevilla welcome Atletico Madrid this evening, and Sandro Ramirez, on loan from Everton, will hope he can get some minutes on the pitch.

Marca say it could have all been very different, and Sandro could be lining up for Atletico, had he not turned them down and moved to Goodison Park instead.

The Spanish newspaper say Sandro had a medical to join Atletico on June 3rd, but a few days later, the club’s transfer ban was kept in place which meant he wouldn’t be able to play for the Rojiblanco.

Atletico still had a plan, they could sign Sandro and then loan him out to his previous club Malaga, with the striker then moving in the winter window. But then Everton appeared, and Sandro started to have doubts. 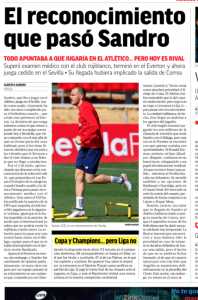 Whilst the La Liga side were still confident of a deal, they learned Sandro had travelled to England and had a medical with Everton, something which annoyed them.

Turning his back on the Atletico chance for Everton, worried of too much competition at the Spanish club, Sandro moved to Merseyside.

The rest is history, and not great history for Sandro. The Everton transfer was a disaster move, and he’s now on loan at Sevilla.