The future of Dani Ceballos appears to be on the agenda this week with all roads pointing to him joining Arsenal.

The Real Madrid man has been a major part of summer speculation for the past few weeks, with him keen to get regular game time and Madrid wanting to find it for him, albeit in a loan rather than a permanent sale.

Arsenal are willing to offer that and appear to have won the race for the midfielder, with Tottenham also having shown an interest.

Indeed, AS reported today that the move is almost complete and that Ceballos may even be pictured holding his new Arsenal shirt at some point today.

Marca disagree with that, suggesting the move is not that far along but saying Arsenal are ‘the best placed’ to secure his 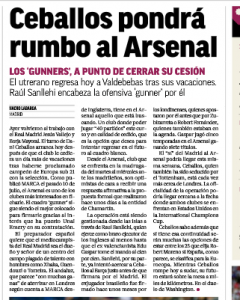 Unai Emery wants Ceballos to be the heartbeat of his midfield, with Marca saying he will be ‘owner and lord’ under Emery.

Raul Sanllehi is pushing the deal through and it could be completed this week.

Ceballos, for his part, is ‘eager’ to make the move as Arsenal provide exactly what he is looking for; a loan club who can offer him 40 games this season and a chance to prove his worth to Real Madrid in future.