Sevilla are ready to open negotiations with Tottenham for defender Jules Koundé should they look to sign him this summer.

That’s according to Marca, who say the Spanish side will sell the Frenchman to fund their own business on the transfer market.

The newspaper covers claims from Italian journalist Gianluca di Marzio yesterday, with him stating Tottenham are close to hiring Nuno Espirito Santo as their next manager, and his first request to the board was to sign Koundé.

Sevilla are yet to receive an offer for the Frenchman, according to Marca, although that is more to do with everything being at a standstill due to the Euros.

The Andalusian club are ‘not closed’ to negotiations, though, and in fact, are waiting to sell the centre back before doing their own business.

They need a ‘major sale’ so they can start working on the signings that manager Julen Lopetegui has requested. 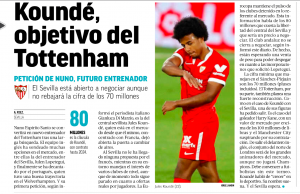 The minimum figure they are looking for is €70m, including bonuses, but there is no indication whether Tottenham will offer such an amount.

Spurs are planning a ‘major rebuild’ themselves, particular if Harry Kane were to leave, with Manchester City wanting to sign him.

That would leave Tottenham as one of the ‘big players’ on the market, and Koundé, at €70m, would be more than affordable with the money brought in.