The front page of Thursday’s Marca presents a worry for Real Madrid and the club’s fans: There’s a chance Vinicius could return to Brazil with former club Flamengo in the January transfer window.

Marca explain it’s a worry Madrid will have to manage. If the player chooses to return to Flamengo on loan then his short stint in Spain will have been considered a failure and it could impact the next time he makes the move to the country.

The Spanish newspaper explain that Madrid putting Vinicius with their Castilla team saw a situation in which the club couldn’t win in the eyes of some media and fans.

If he did well then people would ask why he’s not in Julen Lopetegui’s senior squad, and if he did poorly the questions would revolve around why Madrid paid a €45m fee to Flamengo for him.

In the deal which saw Vinicius move to Real Madrid a year earlier than originally planned, there was a clause enabling the player to return to Brazil on loan in January and play in the state championships. 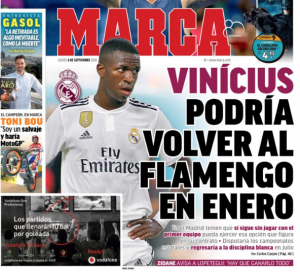 Marca believe that Vinicius could feel a little odd playing for Castilla, going from being an ‘idol’ in front of 80,000 fans at the Maracana to this Sunday playing at Garcia de la Mata, with only 1,000 seats available.

Lopetegui may need to make Vinicius believe there’ll be more senior chances as the season goes on.