Spanish newspaper Marca have a big story on the front page of today’s edition which claims PSG knew Neymar would want an exit this summer.

The 26-year-old feels he made a mistake by joining the French league, which is not competitive enough for him. In addition to this, Neymar hasn’t adjusted to the dressing room at the Parc des Princes.

He wants to leave PSG and has set his sights on playing for Real Madrid next season. Neymar has already asked to leave the club and his father has informed the player’s decision to PSG president Nasser Al-Khelaifi.

The first meeting between Madrid and Neymar’s camp took place when Cristiano Ronaldo won the Ballon d’Or last December. The PSG star was present during the ceremony and he informed the 12-time European champions that he is ready to force a move away from his current employers.

Madrid are aware the Brazil international’s camp will convince PSG owners to sanction the sale, which could see the La Liga giants spend around €260-€300m just in transfer fee.

He is currently earning €37m-a-year net, while Ronaldo is on €23m-a-year at Real. 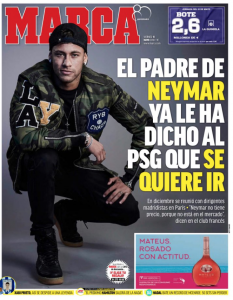 Neymar wants to push a move to Madrid and the club are ready to sanction the sale of a few of their players. Gareth Bale could be sacrificed if the former Santos star arrives in the summer.

The report also claims the South American star is joining Madrid not for money, but for pride.

To make this transfer happen, Real Madrid need to spend big and not just on the transfer fee, but on Neymar’s wages as well. Should this happen, it’s likely that Ronaldo will demand a better deal.