Tuesday’s revelation from Super Deporte that Rafa Mir is on his way to Wolves was a genuine shock. For months Mir has been edged towards a Real Madrid move, with not such much a mention of Wolves.

The 20 year old’s contract expires in June and Valencia had become annoyed that he wasn’t extending, so blocked a path to the first team. Relations broke down and for much of the Spanish media it was just a matter of time before the player signed for Madrid.

Marca have given their view on what happened. Like Super Deporte they say Wolves are paying €2m, but the Spanish newspaper add Real Madrid’s offer was €500k.

The Champions League winners weren’t prepared to go over that amount for the young attacker, and then Wolves came in and blew everything away. 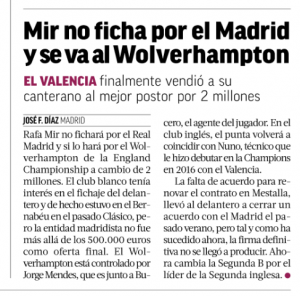 It’s not just money which has helped Wolves, according to Marca: ‘Wolverhampton is controlled by Jorge Mendes, who is close to (Carlos) Bucero, the player’s agent. At the English club, the tip will again coincide with Nuno, a coach who gave him his debut in the Champions League in 2016 with Valencia.’ 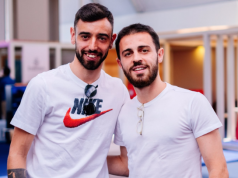 Bayern and Barcelona battling for full-back – Player has ‘set his sights’ on a move, club want ‘top prize’

Bayern and Barcelona battling for full-back – Player has ‘set his...