It’s now time for Spanish newspaper Marca to have something to say on Mauricio Pochettino’s potential return to Tottenham Hotspur this summer.

The outlet today features an interesting piece detailing what’s been going on at Paris Saint Germain, where the manager goes through a delicate situation after only five months in the job.

Despite the rumours about his departure, Marca brings another side of this story, claiming the French side do not plan to change managers during the off-season.

Following their failure in conquering Ligue 1 and the Champions League, the club actually have another guilty figure in mind, and that’s director Leonardo. 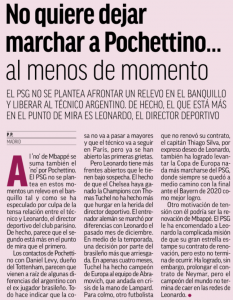 The official reportedly has some ‘differences’ with Pochettino, and that’s why the manager has been in touch with Tottenham president Daniel Levy lately.

This isn’t the first time this happens. Leonardo also had trouble with Thomas Tuchel, and now that the German manager conquered the Champions League in such a short time in charge of Chelsea, some feel it proves that he wasn’t the main issue at PSG.

Besides Tuchel, Marca also points out Thiago Silva as another subject which wasn’t managed well by the director. The defender didn’t have his contract renewed by the French side, and now won the European title with the Blues as well.

Marca makes it clear that PSG don’t want to let Pochettino go ‘at least for now’. He’s expected to stay in Paris, and his return to Tottenham isn’t on the cards for this summer.

If someone has to leave the Parc des Princes, that’d be Leonardo.