Barcelona have been hoping to resolve Samuel Umtiti’s future by handing him a new contract. He arrived at Camp Nou from Lyon in 2016 and still has three years left on his current deal.

The France international has a release clause of €60m and the La Liga side are looking to extend his current deal in order to increase that. According to Spanish newspaper Marca, Barcelona and Umtiti have been involved in negotiations for a while now.

Umtiti wanted to improve his current deal and thus relied on “alleged” offers that came from clubs outside Spain. It was earlier reported the two Manchester clubs – Manchester City and Manchester United – were interested in signing the centre-back.

The 24-year-old approached Manchester City last December, according to Marca, to see if there was any interest from the newly crowned Premier League winners’ manager Pep Guardiola. However, the Etihad outfit decided against making an approach for the Catalan club’s defender.

Instead, City signed Umtiti’s compatriot Aymeric Laporte from Athletic Bilbao in the mid-season transfer window. The Frenchman’s arrival in January has made it difficult for Guardiola to accommodate another centre-back in the squad.

It’s claimed Manchester City believed they were being used to put pressure on Barcelona.

Meanwhile, Jose Mourinho’s side have been heavily linked with the defender, with earlier reports even suggesting the player is ready to reject new Barcelona deal and make a switch to Old Trafford. It was mentioned that United are ready to pay him a net salary of €10m-a-year (£8.8 million).

Marca claims in reality, the former Real Madrid and Chelsea manager has no interest in signing Umtiti for United. 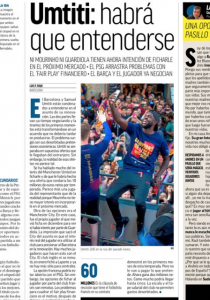 After several disappointments, the report suggests that “everything indicates” the player will commit his future to Barcelona. The Spanish champions’ technical secretary Robert Fernández is aware of Umtiti’s qualities and believes he has progressed at the club.

The central defender is currently earning a net salary of €2m and signing a new contract could see that rise to €5m. Barcelona are unwilling to budge to the former Lyon man’s demands of exorbitant wages and a compromise will have to be found.