If there’s one Portuguese newspaper which has been relentless about Bruno Fernandes recently it’s Correio da Manhã.

They will not shut up about him.

Last weekend they claimed a €45m offer from Liverpool and every day since they’ve had some sort of story.

They’ve reiterated twice this week that the Reds won’t raise that offer, and Manchester United and Tottenham are included in nearly every claim.

This time it’s explained Bruno’s agent Miguel Pinho is back from his trip to England.

It’s claimed he picked up proposals from both Manchester United and Spurs, but those are ‘below the €70m’ which Sporting had hoped for.

Personal terms offered by both clubs are said to be ‘identical’, which would be a surprise. 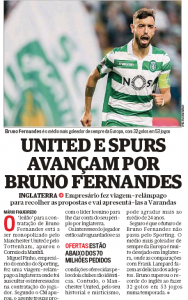 It would be easier to believe Daniel Levy had offered half that of United, and in response Ed Woodward had decided to raise his offer by €20k a week.

A compliment, in a way.

Not quite as good as ‘tempted by Manchester United’s stature, amazing squad, and ability to challenge every year at the highest level’, but still a compliment. 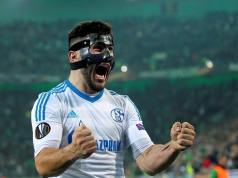