Home Europe With claim of extra €5m being asked for, Manchester United transfer on...
SHARE

If you were wondering why Matteo Darmian, by some miracle, is still a Manchester United player after all the stories sending him to Juventus over the past few months, it’s because the Old Trafford based club are being difficult.

Barely used by José Mourinho, the Italy international has seen the Red Devils slap a €20m price tag on his back, which has put off the Serie A champions quite a bit.

Tuttosport on Monday stated that despite the difference in valuation between the two clubs (Juventus don’t want to go over €12m + €3m in bonuses), a meeting was to be held on Wednesday, which suggested a desire to get a transfer sorted.

However, Gazzetta dello Sport on Tuesday see it a bit differently, with Manchester United’s stubbornness forcing the Italians to go for Joao Cancelo instead, where a €10m loan with a view to buy at €30m is being studied. 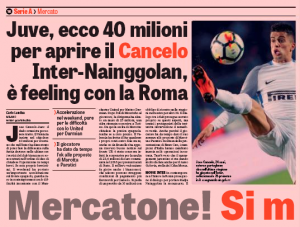 The newspaper state that following Mourinho telling Darmian he was free to go, the club put up a €25m ‘wall’ in front of him, which Juventus aren’t interested in climbing over.

That’s €5m more than any other report we’ve seen so far.

This means that, in Gazzetta’s eyes, the right-back’s move to Turin, for now, appears to be put on hold.