Over the past few years, it’s been made clear by the Italian media that should Paul Pogba leave Manchester United, Sergej Milinković-Savić would be the man the club would target.

The Serbian has been linked time and time again with a move to Red Devils, but because the Frenchman has remained at Old Trafford until the very final year of his contract, no move has ever taken place.

Since there’s a good chance Pogba leaves on a free this summer, this year could finally be the one where we see if all these rumours were true, and Gazzetta dello Sport reckon it is.

Looking at the situation over at Lazio, where Maurizio Sarri wants a few extra bodies to strengthen his squad, it’s made clear that his transfer budget will come from money the club ‘will take from an excellent sale’.

That’s when Milinković-Savić is brought to the fore, because ‘the sacrifice of a big player will finance the entire transfer market’ and ‘not just the purchase of the new midfield player’ the manager wants. 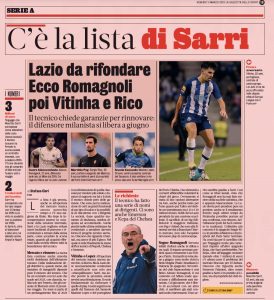 Regarding the Serbia international, it’s pointed out he’s the ‘major suspect’ to be the sacrificial lamb, with both Paris Saint-Germain and Manchester United ‘at the window’.

As we’ve said in the past, it makes more sense for Pogba to leave for the Ligue 1 champions, especially if Real Madrid will focus on Kylian Mbappé and co., instead of Milinković-Savić.

This would leave Manchester United with an open door to get a deal done with Lazio if that’s the player they want.

We’ll have to wait and see about that, though.