Manchester United’s interest in the Vitória Guimarães winger Marcus Edwards is starting to look a little more serious with the latest reports from the Portuguese press.

Today it’s newspaper O Jogo who brings a story about the player, claiming that he’s expensive for the local market, but Sporting are still interested in him.

And when speaking about the competition for the 21-year-old, the outlet claims that the Red Devils are ‘willing’ to make a bid for his transfer this summer.

They write that Manchester United are ‘interested and ready to make an offer’ for Edwards, who has nine goals and nine assists for Vitória Guimarães this season. 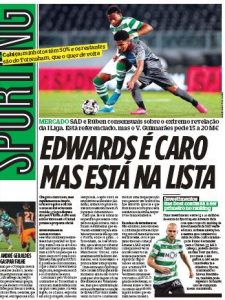 Marcus Edwards left Tottenham Hotspur on a free move to Vitória Guimarães last summer, but the London side kept 50% of a future transfer.

The Portuguese club are now reportedly demanding between €15m and €20m for his move.

Spurs are also said to be interested in his return, and that’s something that has been repeated by local reports in the past couple of weeks, but it’s Manchester United whose interest is starting to be taken more seriously by the Portuguese media.