At the weekend, Marca had a feature on the fantastic young talent at Real Madrid, and the European clubs who have tried to snatch players away.

It’s very much a piece which is designed to make Real Madrid look good, and says clubs including Manchester United, Liverpool, Bayern Munich and PSG have looked to take youngsters away from the Bernabeu.

For Manchester United, the player in question is Martin Ødegaard.

Marca state big clubs around Europe ‘fell in love’ with the Norwegian after his ‘explosion’ whilst on loan at Real Sociedad last season. The Old Trafford club were ‘willing to invest a lot of money’ in the player, in search of someone who could help make them competitive again.

However, Zinedine Zidane’s side held back the ‘attacks’ from Manchester United, knowing that Ødegaard could be an important part of their squad for the current season. 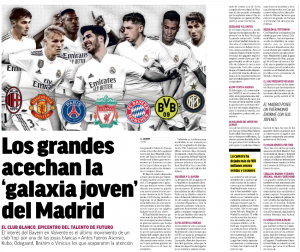 There’s no explanation on how much the Premier League club were prepared to offer, or when the approach was made to Madrid, but Marca make it clear it was after the player’s ‘explosion’ at La Real so it must have been relatively recent.