For the past two days, we’ve relayed news from Spain that Manchester United are keen to sign Real Madrid star Raphaël Varane.

On June 3rd, ABC reported the defender has not renewed his contract because he’s handling a better ‘proposal’ from the Red Devils.

The centre-back’s contract expires in 2022 and if he doesn’t sign a new deal, Los Blancos have a plan to sell him for €70m in the summer transfer window.

Friday’s edition of Sport has a short update on the Old Trafford’s club’s effort to acquire the France international’s services. 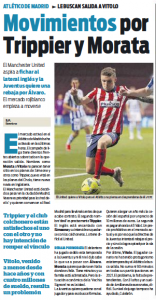 It’s claimed Ole Gunnar Solskjaer’s side are ‘determined to weigh in the city of Madrid’ as the Premier League side also have their eyes on Atlético Madrid’s Kieran Trippier.

Regarding Varane, the newspaper states the World Cup winner is a ‘priority’ target for United.

With Carlo Ancelotti’s side willing to sell Varane [without an extension], United may want to convince Real Madrid to let the player leave for a price much lower than €70m.