Van de Beek completed a move to Old Trafford from Ajax this summer, with United paying a reported £40m for his signature.

He became the latest in a long line of Dutch players to rock up at Manchester United, following in the footsteps of the likes of Robin van Persie, Ruud Van Nistelrooy and current Holland teammate Memphis Depay.

Adapting to life in the Premier League will be vital in determining whether he is a success at the club, with several Dutch players having struggled to make an impact in England’s top flight.

One of the biggest in recent years was Davy Klaassen, who moved to Everton in June 2017, swapping the Ajax captaincy for Merseyside.

The move proved to be a disastrous one, though, as he managed just 16 appearances and one assist at the club before a £12.15m move to Werder Bremen in 2018.

And Gullit has warned Van de Beek that is something to avoid, mainly as they are two very similar players.

“What immediately occurred to me is that he should be careful not to become a second Davy Klaassen. Van de Beek is a younger copy of Davy in terms of play.

“Klaassen chose Everton, but the game of those two comes into its own most in an offensive squad, and therefore it should be easier for Donny at United than it was for Klaassen at Everton. 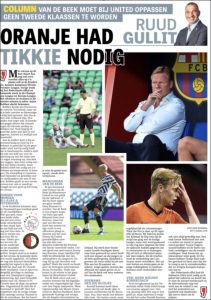 “The latter was snowed under. United plays a game in which Donny can flourish, but at the same time, he remains dependent on his fellow players as attackers.

“And is he allowed to play at his favourite spot? Because it is now occupied by the Portuguese international Bruno Fernandes.

“Van de Beek will also have to get used to being under a magnifying glass every day. Depay can talk about that.”