It was in early January that the rumours linking Pedro Gonçalves to Manchester United started. The saga began with reports from the English media, and then the Portuguese press came to calm things down a little.

Since then, reports from Lisbon slowly admitted that the Red Devils have been interested in the signing by making ‘informal contacts’. What they’ve also been making clear is that there’s no interest from the Lions or Pote (his nickname) to make the move happen.

The latest update came from newspaper Record on Sunday. They claimed Sporting want the winger to stay for the next season, despite the interest from the Red Devils in January.

That’s why it was quite weird to see Eurosport featuring a video titled as ‘Manchester United close on deal for Sporting star Gonçalves as Liverpool circle – Euro Papers’.

They show Wednesday’s front page of newspaper of Record, claiming ‘they report that United have been tracking Pedro Gonçalves for some time’, and ‘Record report United have made contact and will trigger the clause in the coming weeks’.

Eurosport also claims that Sporting made a ‘mistake’ by including a release clause of only €60m in Pote’s contract, since that would make it easy for Premier League clubs to take him.

Well, first thing is: Wednesday’s issue of Record doesn’t even have a story on Pote. On Tuesday, they featured an interview with him where Man United were never mentioned. Then again, nothing on Monday.

Record did bring a few articles on their website based on reports from England, but didn’t have an original piece on it, and never claimed that information above.

Now regarding the release clause, why would it be a mistake, exactly? Sporting’s idea of not negotiating the player and planning to keep him to feature in the Champions League next year is exactly because he’s well protected by the clause.

Even though Manchester United are used to making big purchases, a €60m fee would be huge for the Lions, as he’d end up being their biggest sale in history with a player who’s only been at the club for a few months. 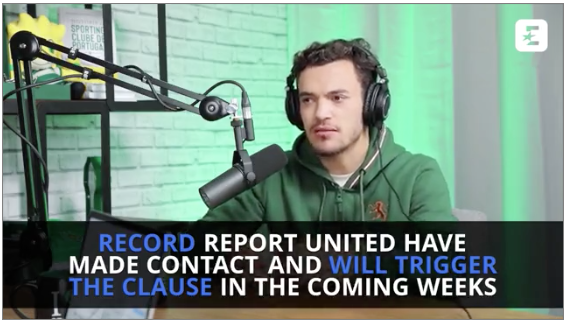 Now regardless of what the Lions plan to do or not, it’s quite disappointing to see Eurosport giving the impression they’ve read a newspaper, showing the front cover, and then attributing claims to that newspaper which simply don’t exist. It’s grossly unfair on Record..

Transfer rumours often get mistranslated and mixed up days after they originally come from the printed outlets, and that’s probably what’s happening now.