After a run of five matches without a win, Sporting finally got three points last night by beating Aves 1-0 away from home.

It wasn’t the best performance from the Lions, but the result was just what they needed in the first game of manager Silas in charge.

It turns out that only one English club was there to check the match, and it was Manchester United, according to A Bola. The Red Devils just can’t stay away from the Lisbon side.

What also didn’t change is that Bruno Fernandes was decisive again, this time by captaining and scoring Sporting’s winning goal. 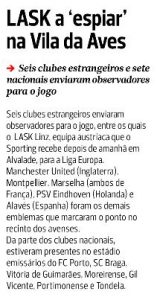 Bruno Fernandes has now scored in five consecutive games, which is a personal record for him, even though he did it in four matches in a row in the previous couple of seasons.

Another player who did quite well was Yannick Bolasie, who won the decisive penalty, although it’s quite unlikely that United would be interested in the Everton loanee.

Meanwhile, Fernandes probably wonders what else he needs to do until a Premier League club come and get him.