Portuguese side Benfica apparently still have hopes they can sign Joel Pereira from Manchester United.

The local media actually seem a little lost regarding this chase, with a few outlets reporting the Eagles have given up, and others saying the hunt is still on.

Benfica would be taking the chance to include Pereira in the Victor Lindelof deal, especially because their intention was to make €60m from the defender, and it won’t be possible because United won’t pay more than €35m.

So Vieira accepted the €35m offer, but is now pushing for the youngster to be included. The 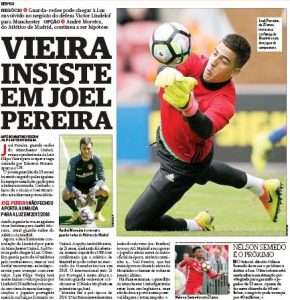 problem is that neither Jose Mourinho or Pereira want the exit, so the goalkeeper’s transfer isn’t close to happening.

Meanwhile, Benfica are in negotiations with Atletico Madrid for the purchase of Andre Moreira. The interest in both young goalkeepers has been reported by the Portuguese media for months now.

Benfica may be insistent, but right now their chances look slim.