Tuttosport have wheeled out their percentages again, and it’s no surprise they again state Matteo Darmian to Juventus is almost there.

The Turin newspaper have been reporting the Manchester United transfer as being nearly done for some months, even though there hasn’t been a great deal of information about what type of transfer fee Juventus would be looking at.

Tuttosport assume that because Darmian looks kindly at a move to Juve, the club want him, and Jose Mourinho certainly isn’t the player’s biggest fan, that a transfer would be relatively easy to do. They’ve also repeatedly explained the two clubs involved have a good relationship.

On Sunday, it’s stated Darmian to Juventus is ‘90%’ there and it’s one of the Juve signings the newspaper are most confident about. 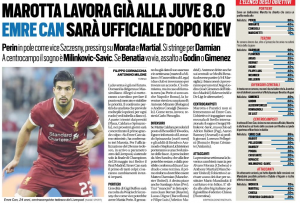 Now Manchester United have played their final game of the season, there’s no reason for this to all drag on for much longer, and if the claims have been true then Darmian should be wearing the back and white stripes soon.

As for Paul Pogba and Anthony Martial to Juventus, they’re considered less likely at 30% and 45% respectively.