After months of approaches and talks, Juventus are reportedly getting to the ‘decisive days’ to sign their targets for next season.

This is how newspaper Tuttosport talks about the chase for Manchester United fullback Matteo Darmian today, with things expected to get quite serious in the next couple of weeks.

The outlet claims that Juve are expecting ‘white smoke’ from this saga, even though they’re being a bit patient as they negotiate a fee with the Red Devils.

According to Tuttosport, the bonuses included in the deal should be crucial for the Old Lady to get a deal for the Italian international. 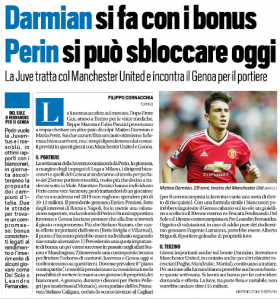 In total, the club don’t want to pay over €15m for Darmian. That probably means we can expect Juve bidding something less than €10m for the player.

Tuttosport also brings a frame explaining the chances which each Juventus target has to join the club. Darmian comes right after Emre Can in that one. While the Liverpool player is already considered a done deal at 100%, the Manchester United fullback comes right behind with 95%.