Manchester United have been repeatedly linked with a move for Pau Torres, and there’s an assumption signing the defender will be easier than getting some other targets.

It’s also been reported the La Liga side could consider a player-plus-cash offer to sell the defender this summer.

Claims made in the British press have reached Spain and Sport on Wednesday provide the Yellow Submarine’s stance on sanctioning the 24-year-old’s sale.

The Catalan newspaper states the ‘price makes the operation difficult’. The centre-back’s release clause is set at €65m and Villarreal president Fernando Roig has ‘already warned’ he will not negotiate for his star’s transfer.

If the Red Devils ‘really want him’, they will have to pay his full buyout clause. In other words, ‘clause or nothing’.

Unai Emery’s side are also not in favour of Manchester United including some of their own players as part of the deal to lower the price for Torres.

That always seemed unlikely, given the difference in wage levels between the two clubs. 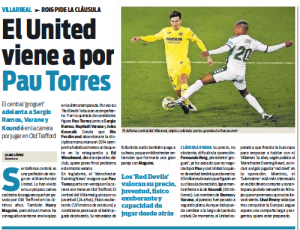 The Spanish club are ‘interested in receiving hard and fast money’, so they can invest the funds in making new additions.

Sport’s report indicates United will have to meet the conditions set by Villarreal if they ‘really want’ to sign Torres.