It’s getting to that time of year when the Spanish media throws itself head first into transfer rumours. Of course, there’s transfer rumours all year, but the months of May and June see the rumours of the summer being built and discussed.

Manchester United are once again going to be a big part of the Spanish rumour mill. Sport newspaper says they’re already in talks with Real Madrid over four potential transfers, one out and three in.

The one out is of course David De Gea, and the potential three in are Keylor Navas, James Rodriguez and Alvaro Morata. Manchester United agreed a deal to sign Navas at the same time they agreed to sell De Gea to Real Madrid, but both transfers collapsed.

Navas isn’t having a great season and it would be no surprise if the Spanish media believe Mourinho holds more interest than he actually does. 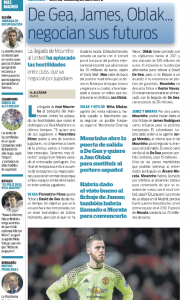 The same could be true for the two others: James Rodriguez and Alvaro Morata.

James hasn’t worked out as Real Madrid signing and with his agent being Jorge Mendes, Mourinho links are inevitable.

Morata isn’t getting the minutes he wanted at Real Madrid, and a transfer is quite possible, but Mourinho may be looking for someone with more experience than the 24 year old, given he already has a youthful selection of attackers.