Sporting now admit they haven’t received a single official offer, from Manchester United or anyone else, for their captain Bruno Fernandes so far.

Speaking to Radio Observador on Monday, club president Federico Varandas has cleared up the situation, saying the player is not on the verge of leaving.

“Only talks,” Varandas told Radio Observador (via A Bola). “I still haven’t thought about a minimum price but I can say that he will be the biggest sale of Sporting, looking at the 40 million of João Mário.”

Newspaper Correio da Manhã also brings a story on the situation today, claiming that despite the lack of official offers, the negotiations for the midfielder’s transfer continue. 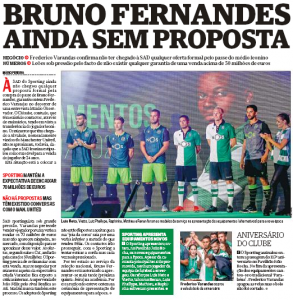 The outlet says there have been contacts via emissaries. A problem is that the numbers, especially from Manchester United, are not getting to what Sporting expected.

The Lions are said to be under ‘great pressure’, since they thought they would make €70m with the sale, but the potential offers agents are taking back and forth are of about €50m.

Correio da Manhã claims that Sporting need the money, but if they sell him for that amount, they will be exposed to internal criticism, since Lisbon rivals Benfica have just sold their star for €120m. Fans won’t accept seeing Bruno leaving for less than half.

It’s claimed that Sporting will insist on ‘pulling the rope’, but they are ‘under more pressure’. Perhaps it means they will end up having to give in and sell Fernandes for much less than expected, regardless of the consequences.

Maybe Manchester United have suspected this all along. Quite cunning from Ed Woodward if so.