Manchester United reportedly had a special scout watching the game between Braga and Benfica for the Portuguese League at the weekend.

According to newspaper O Jogo, the Red Devils have sent their chief scout Marcel Bout to make a bigger evaluation on two targets: Ruben Dias and João Félix.

Not long ago, we had covered claims from the Portuguese press saying United had sent Simon Wells to watch a Benfica game as well.

O Jogo now calls Wells ‘an important scout’, but says that Bout’s presence at the game shows the club are making the last step before deciding if they’re bidding for Dias and Félix. 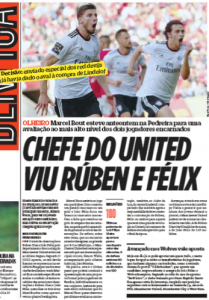 Wells is said to be the same man who did the last scouting job on Victor Lindelof before the Old Trafford side decided to advance for him.

It would now appear that at least one Portugal based scout, plus Wells and Bout have all looked at the players.

With the Benfica president Luís Felipe Vieira saying none of the players will leave in the summer, O Jogo says Manchester United may have to trigger both release clauses.