Spanish newspaper AS believe there could be some competition and business between Real Madrid and PSG in the coming transfer windows.

The two clubs share interest in several players, with everything always coming back to Madrid’s long held wish to snatch Kylian Mbappe away from the French side. Given how tight finances are at the moment, Los Blancos would likely have to include at least one of their stars in the deal if they wanted to build a transfer this summer.

AS present Raphael Varane as a possibility, and believe he would be a good signing for the Ligue 1 club. However, there’s the ongoing issue of Manchester United interest, which the Spanish newspaper insists remains serious ahead of the summer window.

According to the claims, Manchester United ‘sound the strongest’ to bet on Varane’s signing right now, so would be ahead of other interested parties. 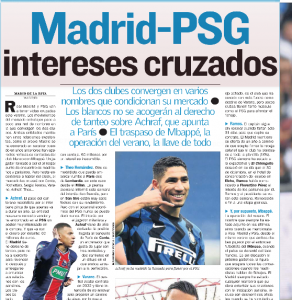 Real Madrid are said to want a minimum of €60m, which is a little drop on the €70m mentioned previously. AS state the Red Devils have ‘always had their eye on him’, and this may be the summer they can do a deal.

Zidane’s contract expires in June 2022, and the defender is said to want a change of scenery, ready for a new adventure elsewhere.