Please don’t hate us Manchester United fans, but La Stampa have not reported that the Red Devils are on the verge of signing Alex Sandro for €50m.

Throughout the day, multiple social media posts have circulated claiming that the Italian newspaper had made the claims, which got the Old Trafford faithful quite giddy.

That’s quite understandable, mostly because José Mourinho has decided Ashley Young is now a left-back while pushing Luke Shaw to one side, but also because Alex Sandro is an exciting player.

While he hasn’t had the best season at Juventus, he’s still an actual left-back, and that’s already a step in the right direction. 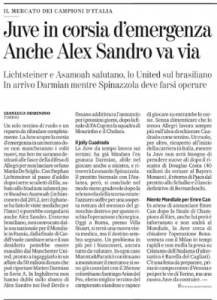 Back to La Stampa.

While the words “Alex Sandro”, “€50m” and “next few days” are all in the article, some key information has been left out to make it all sound a lot more exciting than it actually is.

This is what the Italian newspaper wrote: “The Brazilian full-back, who wasn’t called up by his country for the World Cup in Russia, has wanted a change of air since the final in Cardiff (2017 Champions League) and his wish could be granted by Manchester United, ready to sign him in a €50m affair that could bring Matteo Darmian back to Serie A.

“In England, they don’t have any doubt on the Red Devils landing Alex Sandro, and they even fix for the announcement to be made in the next few days after the FA Cup final between Mourinho’s squad and Chelsea”.

A quick Google search of “Alex Sandro FA Cup” points us in the direction of an article in the Times, published on May 13th, written by Duncan Castles, making those exact claims.

The fee mentioned in the article was £50m, which has now been converted to €50m by La Stampa.

So, erm, yeah, sorry about that United fans.

La Stampa’s claims aren’t what they were made out to be.