Manchester United are focusing their efforts on signing Barcelona’s Frenkie de Jong to bolster their midfield.

That doesn’t mean they have not looked at other areas to strengthen, especially their defence. Sporting’s Gonçalo Inácio is among the centre-back targets identified by the Red Devils.

On June 15th, A Bola stated the ‘extreme trust’ with the 20-year-old’s agent, Miguel Pinho, who also manages Bruno Fernandes, could be decisive for United to land him.

Erik ten Hag’s side are tagged as one of the Portugal U21 international’s suitors in today’s Jornal de Notícias.

It’s claimed Manchester United, Newcastle United, Wolverhampton Wanderers and Barcelona are some of the clubs to have ‘shown interest’ in the player. Inácio has a €45m release clause in s contract that runs until 2026.

The newspaper states an offer ‘very close’ to the buyout clause ‘could tempt’ Sporting to part ways with the defender. Even if United or another club pay this fee, it won’t be easy for them to carry out the deal this summer. 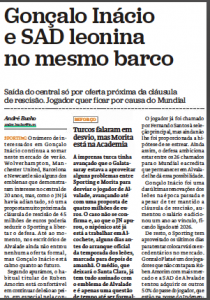 Jornal de Notícias state Inácio, who is a key figure under Rúben Amorim, wants to continue at Sporting in order to improve his chances of representing Portugal at the Qatar World Cup.

He has already received a call up from Fernando Santos, but is yet to debut for the national team.

Despite this, Inácio is of the belief he can make it to Santos’ squad and the best way to achieve it is by not leaving his current employer.