Bruno Fernandes made his 25th appearance for Manchester United on Saturday, and scored a crucial penalty with the last kick of the match.

He’d earlier provided Marcus Rashford with an assist and was again important for Ole Gunnar Solskjaer’s side as they beat Brighton & Hove Albion 3-2.

Portuguese newspaper Record report the 25th match triggers another €5m for Sporting. When the Lisbon club sold their captain at the end of the January window, there were various clauses allowing them to make more money, and Record say the total now guaranteed is €63m.

They’d already picked up an additional €3m when Manchester United qualified for the Champions League. There’s further clauses down the line, related to again qualifying for Europe’s elite competition, and Fernandes’ personal achievements with the club. 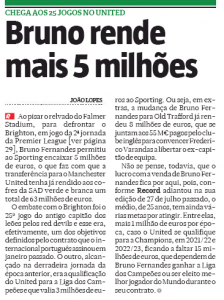 Since his move from Portugal, the 26-year-old has scored 13 goals and provided ten assists. He’s been key for the Red Devils in the period since the move and will be a crucial player for Solskjaer in the current season.