‘Oktoberfest is where Bayern want’, says today one of the headlines from Portugal, where the German side beat Benfica 4-0 in the Champions League last night.

The big match, of course, drew the interest from several clubs, and with Manchester United scouting several local games, they wouldn’t stay away from this one.

The Red Devils’ visit to the Estádio da Luz is today reported by newspaper Record, even though the outlet doesn’t have any details on who the English officials were watching.

Bayern Munich won with two goals scored by Leroy Sané, one from Robert Lewandowski and a little help from Everton Cebolinha, who unfortunately found the back of his own net.

The Bundesliga giants’ performance was based on their big stars, and judging by how these scouting visits in Portugal are frequent, we can bet that Manchester United were more interested in how the players from the home side would deal with such a difficult challenge. 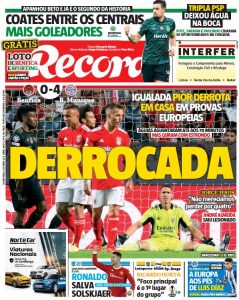 Now when talking about Benfica, it’s hard not to think about Darwin Nunez, the striker who’s been the club’s sensation and was recently linked to a Manchester United move.

Even though the 22-year-old couldn’t do a lot last night, he was picked by newspaper O Jogo as Benfica’s man of the match, as he was ‘truly devilish’ when showing ‘strength and speed’ in the Eagles’ attack.

He has six goals in 9 appearances so far, and has been dubbed the ‘new Cavani’.

Other Benfica players who had their performances praised were goalkeeper Odysseas Vlachodimos, defender Lucas Veríssimo and midfielder João Mário.

They all had a fair display despite all the difficulty involved.