For the past week, we’ve seen Benfica and Manchester United both being linked to Barcelona goalkeeper Jasper Cillessen.

With the Eagles wanting a second option for the position and the Red Devils rumoured to be looking for a possible replacement for David De Gea, the Dutchman has been reported as a target for both clubs.

But if Benfica end up having two goalkeepers, why don’t Manchester United sign one of them? Well, this is a possibility brought by newspaper Record today.

They say the Old Trafford side are interested in 25 year old Oysseas Vlachodimos, who’s currently the number one at the Portuguese champions. 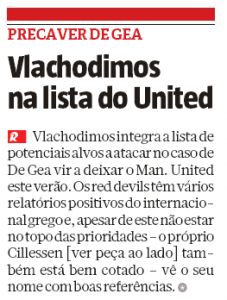 Record says Vlachodimos is in Man United’s list of targets to go for in case of De Gea’s departure. The Red Devils have ‘good reports’ of his performances, although he’s not in a high position in their list of priorities.

Born in Stuttgart, he played for Germany at all the youth levels before switching to Greece recently.

The newspaper also recalls that both clubs are interested in Jasper Cillessen, with the Dutch goalkeeper having a better position in United’s list than Vlachodimos himself.