Manchester United’s Chris Smalling is set to remain on loan at AS Roma next season, although the two clubs are yet to agree on a price for the defender.

Smalling has spent this season on loan with the Serie A side, departing Old Trafford after it was made clear he was not in Ole Gunnar Solskjær’s plans.

He’s proven to be a big hit with the club, becoming a key player under Paulo Fonseca and very much rediscovering his form.

They are keen to keep him for next season but have not been able to negotiate a permanent deal that suits them and Manchester United.

However, Corriere Dello Sport now report that he ‘will remain’ on loan for at least another year despite ‘complications’ in the negotiations.

Those issues are around what price Roma will pay next year to make the deal permanent, with the second loan deal set to include a mandatory purchase option at the end of it.

The transfer is very much dependant on those ‘conditions’ and Roma chiefs Franco Baldini and Guido Fienga are negotiating with Manchester United over it. 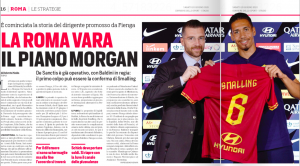 The newspaper makes no mention of what price United are looking for, but earlier reports have put United’s asking price at around €20m.

That is a fee Roma have made it clear on several occasions that they cannot afford to pay, which would suggest negotiations are set to go on for a while yet before this second loan deal is finalised.