Italian newspaper Tuttosport has always been capable of digging up rumours we had completely forgotten about.

Now the outlet brings one of their big stories listing all the players who could leave Juventus in the next transfer window. One of the names in the article is Douglas Costa, who’s said to be wanted by Manchester United and Paris Saint Germain.

Regarding the the Red Devils, it’s said the club ‘remain interested in the Brazilian Flash’.

Juventus are said to be waiting for contacts and offers they get for the player. For now, there have been no more than approaches for him.

Costa hasn’t been having a great season for the Serie A side. The Brazilian has made only 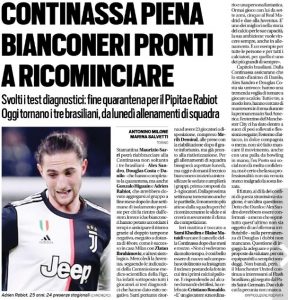 14 appearances for the club so far, getting two goals and five assists.

Since the Old Lady paid over €40m to sign him from Bayern Munich, it’d be no surprise to see them trying to recover part of the investment in the next summer.

Manchester United interest would be welcome, but that doesn’t mean it exists to the level Tuttosport claim.