Rashford has become a leading voice in the relentless campaign to ensure children do not go hungry since the beginning of the Coronavirus epidemic.

It’s a fight he’s taken up directly against the government, who recently voted to oppose extending the free school meals scheme during half-term.

That saw an outpouring of pledges from local businesses across the country, with numerous companies large and small offering free meals to those in need.

The move saw the Manchester United striker sharing the efforts from these companies on his social media channels, effectively turning his Twitter feed into another campaign against the government.

His efforts have seen him receive praise across the board, and the latest to join that chorus is Van Persie.

“You all have to help each other in this corona crisis. Those who understand that better than anyone else is the young Marcus Rashford at Manchester United,” he told De Telegraaf.

“He has just turned 23, and it is amazing what he has achieved in his life, both on and off the field.

“I spoke to him for a long time, and he told me what moved him to fight for meals at school for all the children. 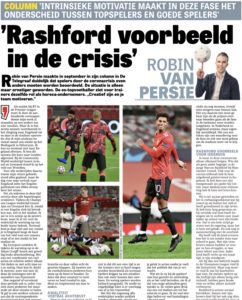 “When he scores a hat-trick in the Champions League, I think that is fantastic. But I like even better what he shows out there.

“Most players at that age are only concerned with themselves, do not have a broad vision and only want to improve themselves. Rashford is very socially involved.

“Together with his brothers he also does it smartly. It is a wonderful example of achieving something by working together. It is the way to get out of the crisis together.”