For the past several weeks, various reports coming out of the Spanish media have insisted on Manchester United’s interest in Ronald Araújo.

Last Friday, we covered claims made by Sport that the Red Devils’ chances of taking him away from Barcelona are increasing. A day later, the same outlet explained the Premier League side are ‘willing to pay the transfer fee’ to acquire the defender’s services.

The 23-year-old has so far not extended his contract at the Camp Nou and will have less than 12 months left on his current deal in July.

According to Mundo Deportivo, the Catalan club’s agreement with the centre-back’s agent is not close. In fact, the negotiations are ‘stranded’ and the contacts have ‘slowed down’ for both his and Gavi’s renewals.

Although the Uruguay international’s priority is to renew, the report adds there won’t be any ‘imminent resolution’ over his long-term future. Barcelona expect ‘fewer problems’ to renew the midfielder’s contract than Araújo. 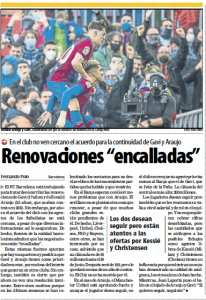 Manchester United are in the picture for Araújo and are ‘pushing hard’ to sign him in the summer.

The defender wants to continue [and wants to be rewarded with a deal for his performances on the pitch] at the Camp Nou, but the Catalan club are aware his agent, Iván de la Peña, ‘prioritises Barca less than Gavi’.

The South American has a €200m release clause. However, without a renewal, Barcelona could be forced to sell him for a much lower price in the summer, in order to avoid the risk of letting Araújo leave for nothing in 2023.