Home Europe Manchester United and PSG ‘seem to be ahead’ for signing – Manager...
SHARE

Manchester United have spent much of this week being linked with FC Porto’s Vitinha, with the club looking to bring in midfielders this summer.

They’ve so far failed to get anything over the line, and the Frenkie de Jong situation is somewhat stalling. Vitinha is a player they could sign more easily, especially with Porto said to be looking for a buyer.

Friday’s edition of Record reports Porto manager Sérgio Conceição is annoyed with the situation. He feels he was given assurances the midfielder wouldn’t be sold this summer, and now he’s found out the club are actively looking for a buyer, and have asked Jorge Mendes to locate a Premier League club.

Over at A Bola, they say Manchester United and PSG ‘seem to be ahead’ of others for the signing. Despite that, the claims don’t feel especially strong and it’s more a case of Porto’s president, Pinto da Costa, looking for a club to match Vitinha’s €40m clause. 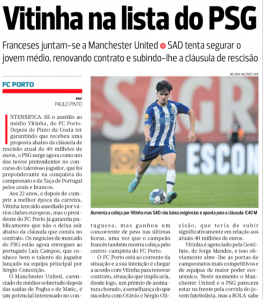 He’s already publicly claimed, earlier this week, that he’s received a big offer which still fell short of that figure, and rejected it.

Whether that was just words for the market is unknown.