Manchester United have been handed a boost ahead of their meeting with Paris Saint Germain in the Champions League on Tuesday, with Leandro Paredes set to miss the game.

That’s according to Le Parisien, who say the Argentine midfielder has ‘very little chance’ of making the match after picking up an injury in Friday’s 4-0 win over Nîmes.

Paredes started the game for the French champions but lasted just ten minutes before being withdrawn because of a ‘pain behind his right thigh’.

It’s explained that manager Thomas Tuchel ‘almost forfeited’ the midfielder in the game before later admitting that the player is ‘not doing well’.

His potential absence for the clash with Manchester United is described as ‘all the more annoying’ for PSG because they are already facing several injury problems ahead of the game. 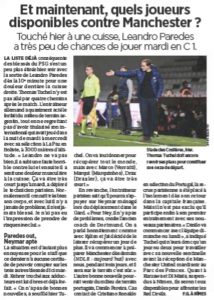 Defender Thilo Kehrer has already been ruled out while Marco Veratti, Marquinho and Julian Draxler are all facing late fitness tests as well.

Adding Paredes to that mix would be another problem for Tuchel to overcome.

It’s not all bad news for the PSG boss, however, as Neymar, Layvin Kurzawa and Angel Di Maria will be available.

Still, Manchester United will undoubtedly be keeping an eye on the situation, with Paredes potential exclusion sure to determine how they approach the game.