With Manchester United facing Juventus again in the Champions League this week, it’s led to endless rumours about potential transfers from the Red Devils to the Turin side.

Chief among them is Paul Pogba, and the media closest to Juventus continually insist the Frenchman would be keen on again leaving Old Trafford for the club.

The story usually goes that there’s been some kind of talks with agent Mino Raiola, which Tuttosport have mentioned again, and then it all tends to get complicated when money and practicalities become involved.

As part of the rumour, Tuttosport have decided Manchester United are looking for a Pogba replacement and they claim it’s ‘not by chance’ that the club has ‘probed’ Tottenham for the signing of Victor Wanyama. 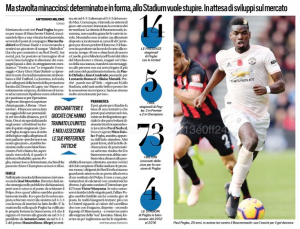 They don’t say where this information has come from, or what Tottenham’s response to the probing was, but the two players are hardly copies of one another.

Wanyama has a contract with Spurs until 2021, so the club wouldn’t be under pressure to sell unless it absolutes suits them.