Friday’s edition of AS accused Paul Pogba of throwing a tantrum, via his latest comments over a move to Real Madrid.

Quizzed about playing for Zinedine Zidane by the French media this week, the Manchester United player chose not to swerve the question and instead made it clear it would be a dream to sign for Los Blancos.

AS weren’t impressed and suggested Pogba was looking to shake his future up, with the insinuation he was trying to nudge Madrid or give his current club encouragement to come forward with a renewal offer.

Saturday’s edition of AS goes even further, making a move to Real Madrid sound very unlikely. They say Pogba’s SOS to the Spanish side will go unheard.

There will be no answer from the Bernabeu and Mino Raiola, the midfielder’s agent, has recently been informed Madrid have ‘completely ruled out’ signing the Frenchman. 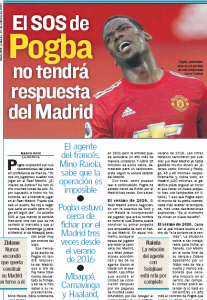 Therefore, the agent knows the switch is now ‘impossible’, and AS suggest Pogba’s comments could be related to Raiola’s relationship with Ole Gunnar Solskjaer being ‘completely broken’.

Real Madrid have other priorities, with Pogba’s national teammates Kylian Mbappe and Eduardo Camavinga, being far ahead of him right now.

Unless there’s a dramatic change, the midfielder’s dream will go unfulfilled.