On Friday, Manchester United confirmed they have released nine academy players and Angel Gomes’ name was not included in the list.

The 19-year-old’s current deal expires on June 30th and Ole Gunnar Solskjaer has already revealed the Red Devils have offered him a new contract.

He is yet to commit his future to the Old Trafford club.

Mundo Deportivo explain the attacking midfielder is one of the ‘most outstanding’ young talents in the Premier League and his name has been associated with Barcelona and Paris Saint-Germain.

The England U20 international has been discussed as a target for the Catalan club again, and he was also linked with them last summer.

It’s claimed the ‘interest’ from the Spanish champions saw United ‘triple his salary’. The newspaper, however, doesn’t make it clear if the offer to triple the teenager’s salary was made in recent weeks or in 2019. 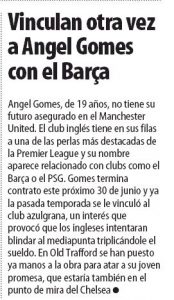 Manchester United have already started work to secure Gomes’ future and with less than four days left, Solskjaer’s side are running out of time.

Gomes has been restricted to five appearances, which includes three starts, in all competitions for United’s first team this season.