With a player on the verge of leaving a club, he’s spotted playing football wearing the jersey of a side he’s been linked to.

That’d probably be enough to fuel the transfer rumours of 99% of footballers, but not for Marcos Rojo.

The Manchester United defender is currently spending time in Argentina as he sorts out his future, and as reported by Olé, he’s been seen with an Estudiantes shirt.

The 30-year-old, who started his career at the La Plata side and even had a short loan spell there last year, has been linked to a return in the past few weeks.

Now he was seen wearing Estudiantes’ kit in a match with friends, where the other team was formed by Gimnasia fans, making it a La Plata derby.

As we just said, that should be enough for more rumours about his return to Estudiantes, but Olé continue to be confident that he’s going elsewhere. 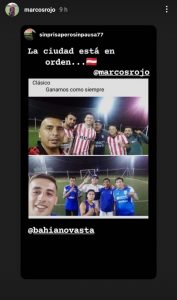 The outlet writes that his destiny is ‘practically set’, as he’ll be ‘the new Boca Juniors player’. Rojo is said to be waiting for Manchester United to let him go and then sign for the Buenos Aires side after the 1st of February.

The defender’s contract with the Red Devils only expires in the summer, but since the Argentine club are signing him if for free, they need the deal to be rescinded first.