Despite the big news in Argentina saying a couple of local clubs could soon be signing Sergio Romero from Manchester United, we see a report from TN taking things easier today.

The outlet comes up to say that even though the goalkeeper has Boca Juniors and Racing Club as two options for his future, he should actually wait for offers from Europe before taking any decisions.

Sergio Romero’s contract with Manchester United expires in the summer, and there’s no expectation he could renew his deal with the Old Trafford side.

That’s why his arrival is possible for Argentine clubs. Racing have his affection for being his former club, as their president confirmed the interest last week. 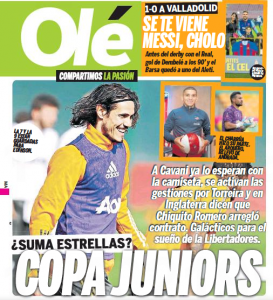 Meanwhile, Boca Juniors see the 34-year-old as a potential replacement for Esteban Andrada. They want to continue building a strong squad to have a shot at the Copa Libertadores title.

Romero is today one of the targets on the front page of Argentine newspaper Olé as well. He’s named alongside Edinson Cavani and Lucas Torreira as some of the stars who could soon be arriving at La Bombonera.