The saga linking Paul Pogba with a move away from Manchester United has been going on for the past two years and it’s not going away soon.

Real Madrid wanted to take the midfielder last summer and his agent, Mino Raiola, even claimed “there was a big interest” from the La Liga side to sign his client.

The deal never materialised after United decided against allowing him to leave Old Trafford.

Marca, however, state Real Madrid’s failure to offload Gareth Bale and James Rodríguez was the reason for their failure to sign the 27-year-old.

It’s claimed the former Juventus man still sees joining Zinedine Zidane’s side as a priority in the summer.

Pogba is now waiting for his Real Madrid love to be reciprocated by the 13-time European champions.

The midfielder’s contract with Ole Gunnar Solskjaer’s side runs down in 2021 and Marca reckon Pogba’s price tag can drop once football resumes post the Covid-19 crisis. This could be a significant boost for those clubs interested in signing the player. 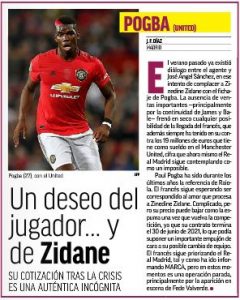 Marca haven’t taken into account that United retain an option to extend Pogba’s contract until 2022.

Even though Pogba is waiting for a response from Real Madrid, the report suggests he is not likely to receive transfer love soon… because of Federico Valverde’s emergence at the Spanish club.