When the rumours of Sergio Romero’s departure from Manchester United came out, there was quite some excitement in Argentina. That’s because his former club Racing were hopeful the goalkeeper could return, as manager Diego Milito had him on a list of possible signings.

But Olé, the biggest sports newspaper in the country, was quick on dismissing the rumour. They went straight to the goalkeeper to talk about the chance of his comeback, and didn’t get a very positive answer.

Olé doesn’t publish the quotes, but were told that the move is very complicated, at least in the January transfer market.

Romero has told the newspaper that he has other offers from England, which would give him the chance to play more regularly than at Manchester United. 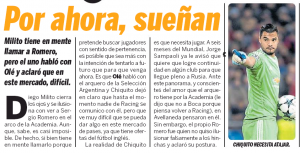 The goalkeeper’s attitude of speaking the truth is praised by the newspaper, who says he’s not giving the Racing fans any false hopes of a move now.

The main reason for Romero to leave Manchester United now would be to get some playing time and convince manager Jorge Smapaoli that he deserves his place at the World Cup.